Blog
You are here: Home / Blog / Blog / Why Is Burning Plastic So Harmful?

The killing fumes
Most fire deaths are not caused by burns, but by smoke inhalation. Often smoke incapacitates so quickly that people are overcome and can’t make it to an otherwise accessible exit. The synthetic materials commonplace in today’s homes produce especially dangerous substances. As a fire grows inside a building, it will often consume most of the available oxygen, slowing the burning process. This “incomplete combustion” results in toxic gases.

Smoke is made of components that can each be lethal in its own way:

particles: Unburned, partially burned, and completely burned substances can be so small they penetrate the respiratory system’s protective filters, and lodge in the lungs. Some are actively toxic; others are irritating to the eyes and digestive system.

vapors: Foglike droplets of liquid can poison if inhaled or absorbed through the skin.

toxic gases: The most common, carbon monoxide (CO), can be deadly, even in small quantities, as it replaced oxygen in the bloodstream. Hydrogen cyanide results from the burning of plastics, such as PVC pipe, and interferes with cellular respiration. Phosgene is formed when household products, such as vinyl materials, are burned. At low levels, phosgene can cause itchy eyes and a sore throat; at higher levels it can cause pulmonary edema and death.

In addition to producing smoke, fire can incapacitate or kill by reducing oxygen levels, either by consuming the oxygen, or by displacing it with other gases. Heat is also a respiratory hazard, as superheated gases burn the respiratory tract. When the air is hot enough, one breath can kill. 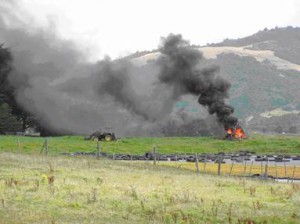 Want to join the discussion?
Feel free to contribute!

This site uses Akismet to reduce spam. Learn how your comment data is processed.

This site uses cookies. By continuing to browse the site, you are agreeing to our use of cookies.

We may request cookies to be set on your device. We use cookies to let us know when you visit our websites, how you interact with us, to enrich your user experience, and to customize your relationship with our website.

Click on the different category headings to find out more. You can also change some of your preferences. Note that blocking some types of cookies may impact your experience on our websites and the services we are able to offer.

These cookies are strictly necessary to provide you with services available through our website and to use some of its features.

Because these cookies are strictly necessary to deliver the website, you cannot refuse them without impacting how our site functions. You can block or delete them by changing your browser settings and force blocking all cookies on this website.

These cookies collect information that is used either in aggregate form to help us understand how our website is being used or how effective our marketing campaigns are, or to help us customize our website and application for you in order to enhance your experience.

If you do not want that we track your visist to our site you can disable tracking in your browser here:

We also use different external services like Google Webfonts, Google Maps and external Video providers. Since these providers may collect personal data like your IP address we allow you to block them here. Please be aware that this might heavily reduce the functionality and appearance of our site. Changes will take effect once you reload the page.